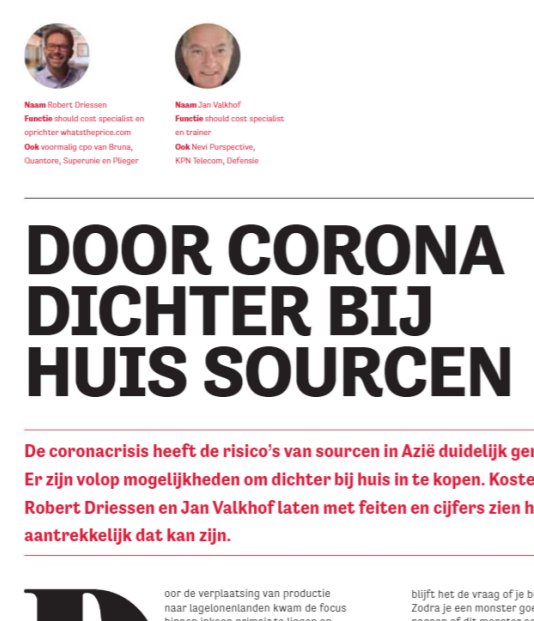 Sourcing closer to home due to corona

Published in the October issue of  DEAL!

The corona crisis has highlighted the risks of sourcing in Asia. There are plenty of opportunities to buy closer to home. Cost specialists Robert Driessen and Jan Valkhof show with facts and figures how appealing this can be.

Due to the move of production to low-wage countries, the primary focus was on cost reduction.  Meanwhile, we seem to have forgotten what the primary task of purchasing is: To secure the supply of goods and services at an acceptable cost. Delivery time and quality are crucial in this respect. Despite this, a climate has arisen in many companies in which purchasers were more likely to be judged on purchase savings than on the availability of goods.

Buying in the Far East requires knowledge of the local market and a thorough backup plan. The corona crisis has highlighted the risks of
sourcing in Asia. One thing is certain: continuing the same way is not an option for many companies. It is time for a rethink.

The question is not whether we should say goodbye to China, but whether companies should consider alternatives, such as dual sourcing, in order to reduce risks. There are plenty of opportunities to buy closer to home, specifically in Central-Eastern Europe. It’s a matter of starting with thorough market research and making the right choices. In the figure below you can see which sectors are strongly represented in Central-Eastern Europe.

Meanwhile, Poland, Slovakia, Hungary, Slovenia and the Czech Republic are among the more modern and in some areas and perhaps even the most modern production countries in Europe. This is the reason for the automotive industry to start production in these countries. The B-Class of Mercedes comes from Hungary and from Slovakia the Audi 08 and soon the Q4, VW Touareg and Porsche Cayenne. Landrover, Renault, Fiat Toyota and other car manufacturers have already discovered Central Eastern Europe.

There are many good quality suppliers and there is a job market with young, well educated people who would like to work for these renowned brands. So there are opportunities here. The supply lines from Central-Eastern Europe are short. Most countries are less than 1500 kilometers from Rotterdam.

The price differences compared to China are rapidly decreasing. In China, labor costs have increased 41.51% over the last four years. In Taiwan, labor costs have even doubled in the same time. This development is expected to continue. From a social and economic point of view, this is a good development, but for companies buying in Asia this is not the case. In addition to the absolute wage costs, the share of these costs in the total costs is also important in order to form a good judgment. Costing can be used for this purpose: what should cost something based on a simulation of the various elements of the cost price.

As an example we take the rear suspension of a mountain bike. This article is produced in Taiwan and ends up in European stores via an Irish importer with a sales price of 141,50 euro. That’s where the margin is. The cost price Taiwan (ex works) is 63 euros, where the production costs are 20.03 euros. Production in China would still be a bit below that with 18.82 euros. But as the table to the left shows, the differences compared to production in Eastern Europe are less than 2 euros, with Serbia being only 37 cents more expensive in this particular case.

Sourcing in the Far East and is only interesting if there is a large share of wage costs and a small share  furniture and soybeans to support this statement. If the share is high, like 29 percent in German country for socks, then the Far East and based on price is a good alternative.

As soon as the proportion of labour is relatively low, 5 percent in Turkey for the manufacture of furniture, then there is hardly any financial incentive to source elsewhere. And when mainly the raw material determines the price, like in the processing of soybeans, the Far East adds almost nothing.

What happens if you honestly calculate and allocate all free elements? This time we take a wooden high chair as an example. This chair costs about 6.50 euros to produce in China, and 8.75 euros in Poland.

Based on this, a buyer would most likely decide to buy in China. That saves 2.20 euros or 25 percent. Of course, the buyer knows that there will still be a few percent costs for transport, management, inventory and exchange rate risk. The price advantage should cover these additional costs. In addition, in many companies, other costs are booked under a different heading and do not directly affect the purchase deal. In short: purchasing scores with the invoice price (and margin), but the logistics department pays the higher one for advice and the accounting department settles the exchange rate risk. If you take a concrete look at these additional costs, the calculation looks different.

The percentages are approximate, but even if you calculate with these averages, the outcome is very surprising. Ex works is the price in Poland 35 percent higher.

The real, fair price, including all other costs, is really 11 percent lower in Poland. Also the other way around, this is good to judge. Suppose a buyer buys a transformer in Germany and wants law and whether this can be cheaper in another country. The labor costs of a transformer are 92 cents in Germany, 17 cents in Poland and 6 cents in China. In Germany the share of the labor cost and in the price is 15%, in Poland 3.8% and in China 1.4%. If the volume is high enough, a switch from Germany to Poland is already very attractive. You save 75 cents per transformer on paper. Although labour costs in China are another 11 cents lower than in Poland, we need to critically examine whether that justifies the decision. For this we saw all the additional costs and risks of purchasing in China.

Based on the above, we make a number of recommendations here:

Reduce risks now and do not wait for the next crisis. As a buyer, you are responsible for securing supplies at an acceptable cost.

Start by recalculating. Keep in mind that labor costs in the Far East are increasing by about 10 percent per year. Recognize that the decision to source in the Far East was often made years ago. Include all elements and the cost price in your calculations. Base your decision on current data.

Take a look at alternatives in Central-Eastern Europe. Many countries there are developing well and are now an attractive alternative for countries in the Far East. 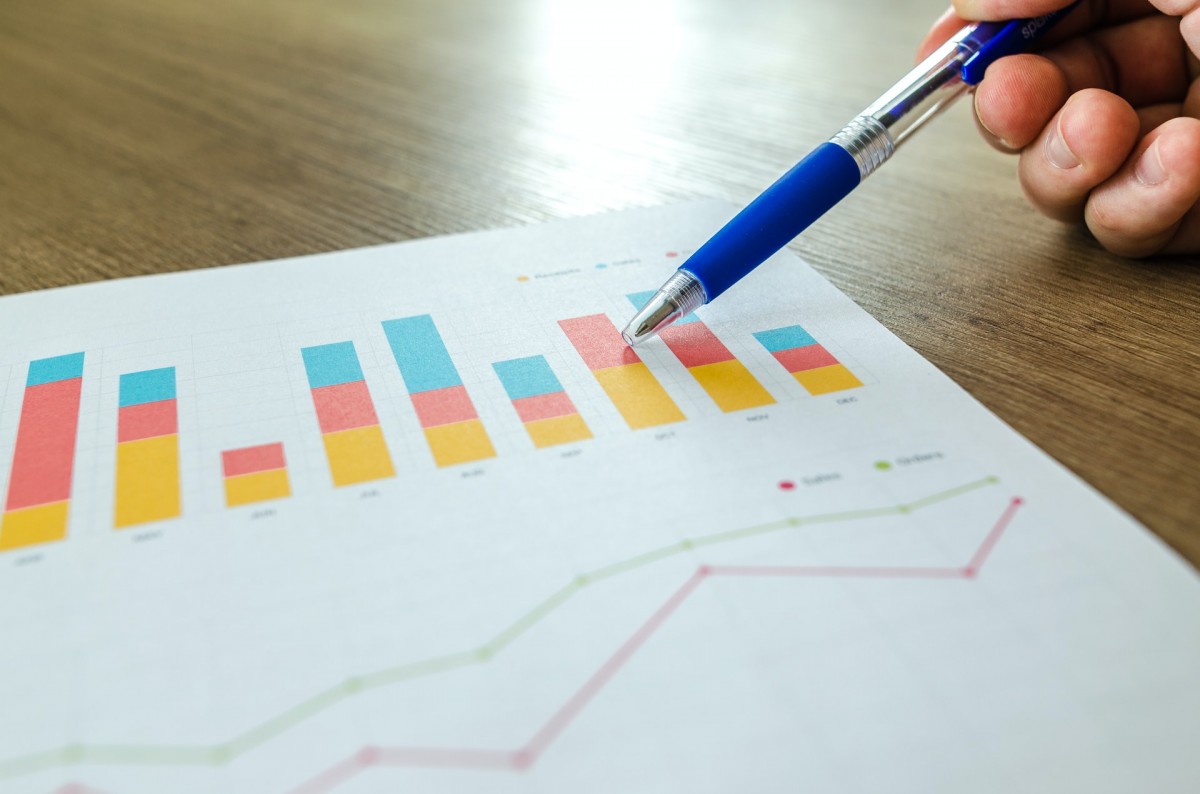 Commercial companies often struggle with reliable purchasing performance measurement: who actually is the best buyer? Answer: in practice, the most successful buyer is often seen as the one who presents himself best. This means that there is little difference with a salesperson or account manager. However, in order to be able to assess procurement performance […]

Obsolete stock, who is actually responsible?

Sales expected a lot but it didn’t work out.” “Yes, well too much was ordered.” “But that one client was going to buy it wasn’t he?” “Who came up with these ridiculous forecasts anyway?” “Maybe we should just wait a while and it will eventually start selling.” “Can’t we just send it back to the […] 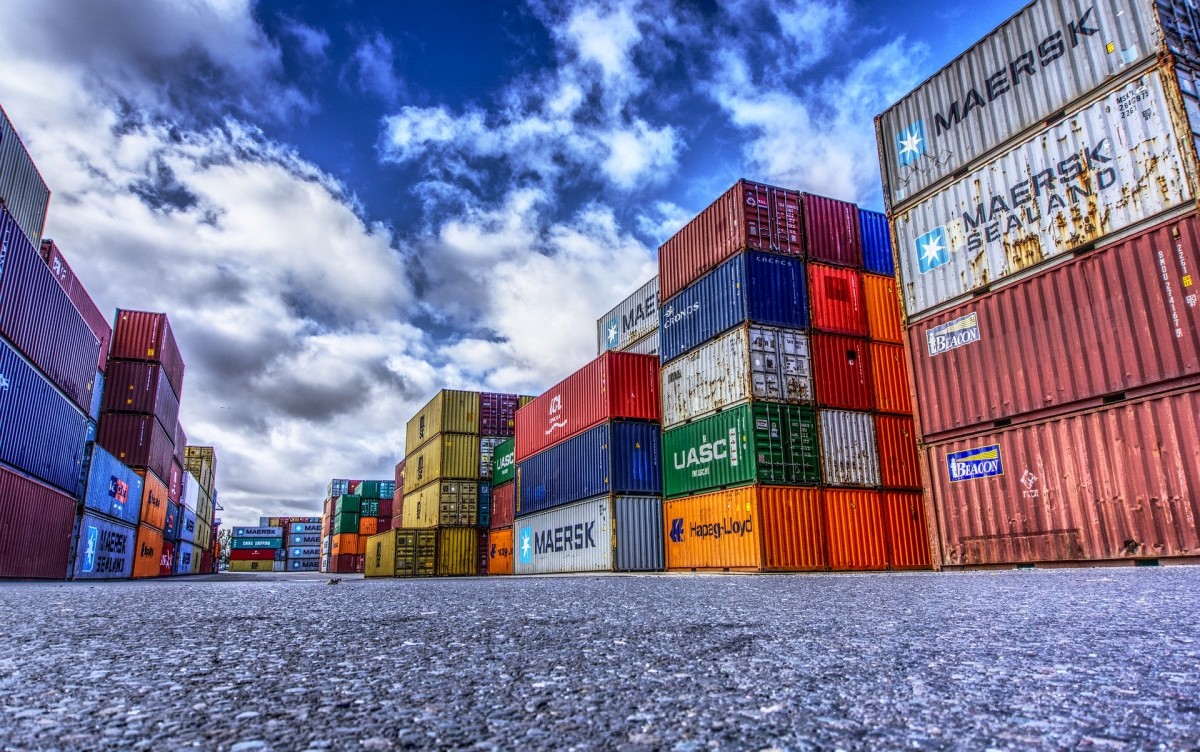 by Ronald W. Bogaschewsky The Corona crises poses critical threats to many Supply Chains. As we have to do our best to get things running again, we should also start thinking about how we make decisions about our sourcing strategies and how to pick new suppliers. Be aware, that the Corona pandemic might last for […]

byRobert Driessen
March 29, 2022
Fly up!
Our woodpecker loves all data! Especially cookies :-). He uses them to ensure you have the best possible experience on our website. By accepting you agree to our cookies.
Read MoreAccept
Manage consent