The mechanism that occurs especially in times of crisis, where real inflation is overshadowed by fake inflation. We call this effect “fictional inflation”. It is usually caused by a combination of uncertainty and (commercial) opportunity.

Parties with an interest in price increases reinforce this process.

When the (global) market is completely disrupted, there is a massive focus on availability. The result is a large, fictitious (fake) demand that in time does not add up. Far too much is temporarily produced and purchased based on panic demand. The result is a vicious cycle that leads to increasing pressure on availability. If you translate this into a graph, it looks like this: 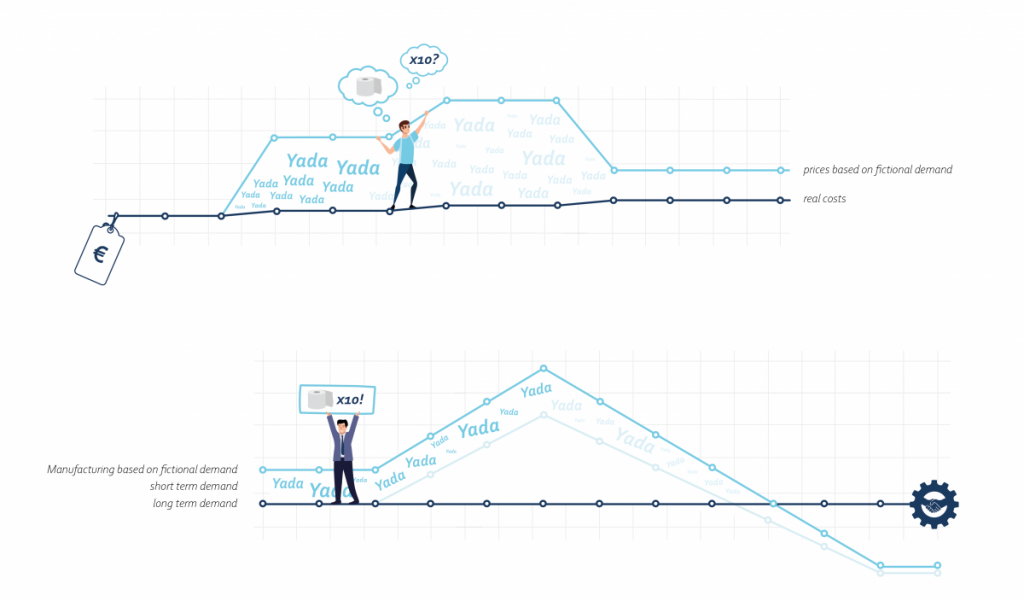 This mechanism increases disruption and drives prices even higher. Salespeople, like buyers, know the impact of improving margins. For every salesperson, this is the time to also think about themselves and improve their own margin.

Point by point, this boils down to the following:

To clarify this theory, here are some examples.

No one will deny that energy prices peaked in 2022. However, the impact (private or business) depends largely on the contract entered into. There are individuals (and companies) who purchased energy at old prices because they had agreed to a long period of price stability with their energy supplier or “hedged” a certain volume. So certainly not everyone is paying that higher price. But almost everyone does use rising energy prices as an argument for price increases. This is the combination of their own costs (whether or not they have risen) combined with the (higher) energy costs of suppliers. However, in almost all cases, the maximum rate is communicated, which also includes a risk factor for the coming period. More is then paid throughout the supply chain, which again has an upward impact.

Demand in the Western world for toilet paper is stable. At most, it follows population growth but our defecation behavior is not subject to major changes. With the outbreak of a crisis, such as Covid-19 in January 2020, there was a sudden run on toilet paper. The graph below shows that demand increased dramatically. As a result, the price rose. But in the long run, the population used exactly the same amount of toilet paper as the period before. Only the pattern of demand led to a disruption in the supply chain. Prices rise with increasing (apparent) demand and remain at higher levels afterwards, even after May 2022.

Translate this characterizing example to our earlier graph and it looks like this:

To finish, an example from my own experience. I am having my kitchen remodeled and, because I am a buyer, I arrange the appliances myself.

I picked out a nice dishwasher, but it has a provisional delivery time of 6 months. I put it on order anyway. Fearing I would have to wash dishes by hand for several months, I continued my search. I found the same dishwasher on a German website, slightly more expensive but can be delivered in 3 months. Since I can still cancel my original order, I ordered this one as well. And then I got a tip from another buyer, dishwashers you can also order directly from a dealer. I found one that was as much as 20% cheaper, only delivery time unknown. Put that one on order too, we’ll see who delivers first.

The result: the manufacturer now expects to deliver 3 dishwashers and adjusts his forecast to this fictitious demand. He is going to buy more materials and components to meet my 3 machines. He also puts on safety stock based on the increased demand. The whole channel thinks it will be a peak year but in reality, I end up buying (and paying for) only one. As a result of this fictitious increased market demand, the market mechanism kicks in and the prices of all the parts and the dishwasher itself rise.

The term fictional inflation does not yet exist, and that is a problem. Because the reality is that the situation occurs daily and it is a silent killer of fair prices. It is time for buyers to confront their suppliers with this term and stop accepting that general inflation leads to exorbitant unfair price increases.

Buyers, don’t get played and give noise to the term fictional inflation to make the common abuse of inflation negotiable!

Fly up!
Our woodpecker loves all data! Especially cookies :-). He uses them to ensure you have the best possible experience on our website. By accepting you agree to our cookies.
Read MoreAccept
Manage consent